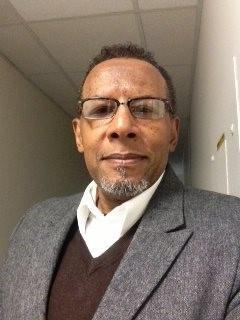 Jonathan Overby, originally from Milwaukee, Wisconsin in the United States, began his career in radio as a student sports play-by-play announcer at Rufus King High School in Milwaukee.  A recipient of a Ford Foundation Academic Scholarship, Jonathan attended San Francisco State University where he received his formal musical training in voice.

Upon returning to Wisconsin, Jonathan, a lyric baritone began performing extensively throughout Wisconsin, the U.S., and Europe with a number of recital tours in Germany, Switzerland, Japan and Poland.  For nearly two decades, he produced and hosted “The Best of Gospel with Jonny O.” on the W.O.R.T. Community Radio station in Madison.  The program, which he created, still retains its original title today.

Overby served from 1984-87 as music director for Pres House Campus Ministry on the UW-Madison campus. From 1989-1993, he also served as an Edgewood College Artist In Residence in the music department – conducting both the College Choral and the Community Choir.

In May of 1994, Jonathan joined Wisconsin Public Radio as a Sunday morning talk-show host.  In 1996, he shifted to hosting and producing a live Saturday night variety show for WPR.  On September 9, 2007, after just a few short weeks designing the concept for what would become a new music program on Wisconsin Public Radio, he began as host and executive producer of the current format of Higher Ground – the Saturday evening world music broadcast, “The Road To Higher Ground with Jonathan Overby“.  The musical theme that opens each edition of the broadcast, was composed and written by Jonathan, and features the Lighthouse Chambers Singers, a choral collective he conducted from 1993-2010.  From 2000-2010, he also conducted the big band, Highway To Heaven.

From 1994-2004 he served two terms as Vice Chair of the Wisconsin Arts Board.  Currently, he is the executive producer and director of Wisconsin’s Official Annual State “Tribute & Ceremony” honoring Dr. Martin Luther King, Jr., the oldest such state ceremony in the nation.  Overby, a lyric baritone, conductor and ethnomusicologist, holds several degrees including a Doctorate in Education from Edgewood College in Madison, Wisconsin.

July 1, 2013, University of Wisconsin Extension Chancellor Ray Cross conferred on Dr. Overby the prefix title of “Distinguished” Wisconsin Public Radio Broadcaster for his efforts as a radio producer, host and, for his community service statewide.  September 1, 2013, he became a member of the doctoral faculty at Edgewood College, where today, he continues to instruct doctoral students in the field of Administrative Leadership In Higher Education.

September of 2014, Overby became the first Post-Doctoral Fellow in the history of Edgewood College.  His four year Joseph E. Schmiedicke Fellowship, was granted to advance his field research linked to “sacred world music and its potential to create greater understand of those who are different as a means of reducing human hatred.”  With pending journeys to India and Tibet in 2017, Overby’s travels and research abroad have included independent excursions throughout the Caribbean, Japan, Zanzibar, Tanzania, Ghana, Poland, Germany, Switzerland, Cuba, Peru, and Morocco.

These travel expeditions says Overby, “…inform how one might better understand the human condition through varied traditions of sacred world music which may have the potential for building bridges between diverse groups while illuminating and celebrating cultural diversity and the inclusion of marginalized groups…such understanding may in fact reduce human hatred”.

On September 22, 2016, UW Colleges and UW-Extension Chancellor Cathy Sandeen, presented Dr. Overby with the “Wisconsin Idea” Award for his “outstanding contributions of service and education to society, and the quality of life in Wisconsin, the nation and the world.” 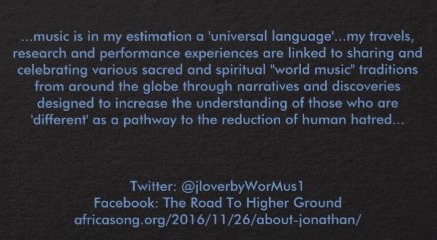 Membership In Professional Organizations – under construction
Society For Ethnomusicology (2015-16) 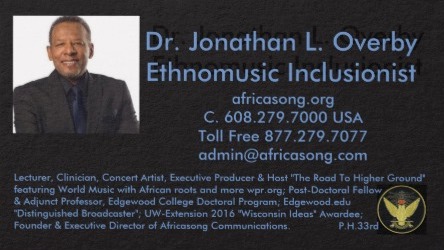